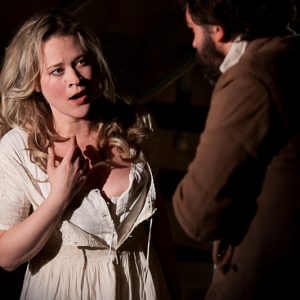 This is a second time that I sing Gilda. It is great to have another go, it gives great perspective as I look at her through myself and look at myself through her. This constant investigation is what I love so much in being an opera singer. This time I want to discover Gilda not only through her operatic journey, but as a woman in a universal sense.

As a child I was fascinated by Greek mythology, my parents were busy separating when I was 8, so I decided to miss a year out of school, to draw attention I guess. I was reading a lot, I memorized almost word by word all the Greek myths – in Russian:)
My parents have come a full circle to talk to each other after 20 years and here I am returning to my fascination, through the story of Persephone- the Goddess of the underworld and rebirth I am investigating a universal story of ages of a woman and illustrate it through the great Operatic heroines.

The three stages are:
1.The pure, innocent, stage of discovery, curiosity, belief, trust.
2. Maturity, experiencing love, tasting life, passion, playing with fire, experiencing disappointment, betrayal, suffering and pain.
3. Wiser women not necessary older, but has experience and knowledge, she is taking responsibilities for her actions, she is making her own choices, she is growing roots and wings to fly. She has faith in love, in herself and she has inner confidence and contentment.

My first Operatic heroine is Gilda, who fits this journey perfectly 🙂

To help my inves
tigation I have come up with 4 questions:
1. Is Gilda innocent
2. How does Gilda develop psychologically
3. Why is she so forgiving and asking everyone to forgive
4. Does she really love the Duca

1. Innocent, as in not guilty 🙂
Gilda is innocent in her lack of experience, lack of knowledge, she is curious about love, life. But she does not lack the mental capacity to understand everything on a deepest level, to love fully, to forgive generously, to take responsibility for her actions, and to make her own choices about her life.
In productions it is up to the director to show all of this and it is for the audience to interpret. 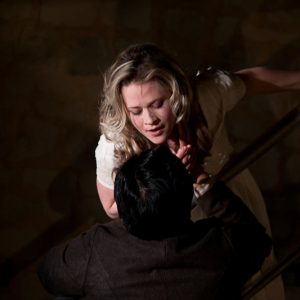 es through an extreme psychological change. What a journey! Locked up, longing to escape her father’s house, falling in love with Duca, abducted into his palace, making love to him, explaining to her father, witnessing Duca betrayal, continues loving him and having faith in his love,  overhears about assassination on Duca or on the father, she decides to sacrifices her life and is killed. Before she dies, she is begging her father to forgive and promises him to pray for his soul in heaven.
For me her story has a clear element of the goddess Persephone story, who is abducted into the underworld and is returned reborn. Gilda is the only character in the opera that is going through a change; she grows up very quickly and finds strengths in herself to free herself from all the weak men around her. She has to die, in those days and the status of a woman was probably her only choice, only escape. A question to ask here will be: was the abduction a secretly desirable event in Persephone/Gilda’s lives? Does it mean that they were destined to go through such dramatic changes?

3. Forgiveness
I am convinced what Persephone/Gilda when talks about Forgiveness is not saying what they did to her is ok, but saying she is not going to let what they did to her ruin her happiness forever-at that time her happiness is freedom. She is begging the same from her father. To let go of revenge, to let free of the weak people who causing you pain and find inner peace.
Gilda talks a lot about forgiveness, and I think it is more that she is begging all the men around her to change, to face the truth, to look deeply into their hearts, into her own heart. She challenges them to courageously let go from the depths of their hearts (not just the head)

She is losing her battle; no one around her is prepared to change. They are all fearful, weak men, locked in repeated patterns of behaviour. Rigoletto is blaming everything and everyone for what happens to him. He blames Destiny for being a hunchback, for losing his wife, he blames the Duca for being a jester, and he blames a curse for what happens to him and Gilda. He never wants to take a responsibility for his own actions. He is never honest with himself or with Gilda. Even Gilda’s death doesn’t make him understand anything. He is worrying too much about everything, which only strips him of joys. Perhaps he loves the drama and by nature is a neurotic worrier, who panics for what he doesn’t want to happen, instead of focusing on what he wants to happen.
Du 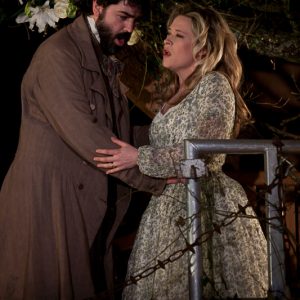 ca is locked in a different patern. He is a womanizer, his system is set to conquer women endlessly, he thinks that he will get closer to happiness and will find peace and contentment. He is in great denial, because when one is looking for external means to solve deepest issues of the heart or soul, one will always find himself  back in square one. Instead of looking courageously into his heart, he is after the next woman to temporary save him. Duca does not take any responsibility for the pain he is causing to all these women.

For both of them it is extremely scary to go beyond the comfort zone.

I have a feeling that Gilda is incredibly intuitive woman that she senses in Duca the potential to change, to love deeply. Perhaps if he would be with her, she could heal him, he will find the contentment and will get close to happiness and will finally love her and himself deeply, not selfishly like he does now. But he is a pathetic coward; he betrays her and essentially himself. Her heart is wounded and she is deeply disappointed, hurt. She continues to love him and to have faith in him despite him not giving anything to her. Her second age of a woman.

She chooses to sacrifices her life. Her choice to save him from death can be interpreted in so many ways. But I think that in is more about her own journey, then about her love for him. This is her third age of woman. She can see that there is nothing she can do for her father or for Duca, because they are not prepared to change, so she is freeing herself from them. Gilda understands that in life there is always a choice, even in the most difficult situation.

As a modern woman I ask myself what would I do in Gilda’s case? I passionately think that I would let go. I would perhaps first mourn over all what is painful, let it wash over me. Because when one suffers he is in transition and perhaps it is there to shape him/her. After all life seams to me as something very liquid and it is like the sea coming in waves, never ending.

In Rigoletto the opera, there is a theme of negative destiny, curse, inevitable fate… yet I am convinced that Gilda’s death is a symbol for freedom, rebirth, new beginning and happiness-which is her destiny…